Learn more how olive oil is made now and it's progression from ancient times. 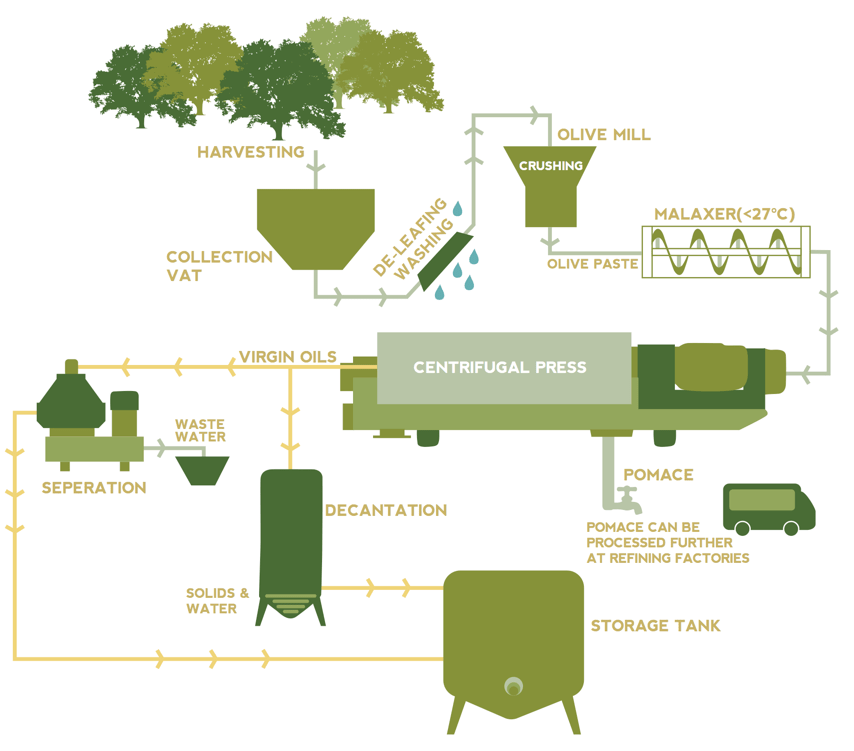 Olives are ready for harvest in the winter months (Apr-Aug in the Southern Hemisphere, Oct-Feb in the Northern Hemisphere) and can be picked by traditional (manual) methods or mechanical methods.
Traditional (or manual) methods may include: picking by hand, using poles/rakes cause the fruits to drop off the tree or shaking the tree using mechanical tree shakers. Except where picked individually by hand, netting will be placed around the tree in order to catch the olives falling from the branches, so that they can be collected easily and quickly to be sent to the mill. Generally it is not good practice, nor common to pick up dropped olives from the ground – at this stage the quality of the fruit is already compromised due to the contact with the moisture and bacteria of the ground and due to oxidation.
Mechanical methods are employed in high-density plantations using hedge-row harvesting vehicles (similar to those in the wine industry, but often larger) that use rotating brushes or rakes to remove the fruit from the trees and catch them with the vehicle tray while moving up the row.
Within hours of harvest, in the shortest time possible to avoid oxidation and retain freshness, the olives must brought to the mill where they are first washed and the fruit separated from stems and leaves.

Once the olives are separated from the branches, there are different ways they may be processed to extract the oil, but the basic principles are still the same today as thousands of years ago: The olive fruit is crushed into a smooth paste which is then pressed to extract the oil (separating the oil from the fruit solids).
The ancient method (still used today by some boutique producers) would involve crushing olives with a millstone, and then transferring the paste into kind of flat baskets, which are then stacked and pressed using physical force. In the modern world, this process is typically done using mechanical milling followed by a malaxer, which is where the olive paste is mixed/blended until it is preparation for pressing, always below 27ºC as per the rules for production of olive oil. Following malaxing, the olive paste is placed into a horizontal centrifuge, which acts as a kind of press, separating the heavier solids and water, from the lighter oil.

After the extraction of the oil from the centrifugal (or mechanical) press the olive oil will be either placed in a temporary tank for decantation or placed in a further centrifuge. These are the two main methods for allowing any residual sediment or water in the oil to be extracted; decantation use gravity to separate the components, while the centrifuge uses the centrifugal force to draw the water and other solid matter out. After the process, the oil is ready to go to the storage tanks.

Once in the tank, the virgin olive oil will be sampled for physico-chemical and sensory analysis as regulated by the international standards of olive oil. This process will result in the virgin olive oil being awarded a specific grade: Extra Virgin, Virgin, Ordinary Virgin or Lampante Virgin. Extra Virgin olive oil is clearly the most prized of all grades of virgin olive oil, however Virgin olive oil may also be sold as a finished product on its own, or blended with other oils. Lampante Virgin olive oil is not fit for human consumption as it is and unless it is being used in other non-food or animal-food applications, it will undergo a further process not shown in this diagram, which is the physical or chemical refining (most commonly physical), whereby the residual fruit components causing the poor flavour, colour and aroma of the oil are extracted from the oil, leaving ultimately only the underlying fat that is just the oil of the olive without any flavour or other compounds that come from the fruit.
In reality, any grade of virgin olive oil may be refined, and often this will include Virgin and Ordinary Virgin grades, although is not a common step to take with Extra Virgin grade.
Refined olive oil is generally not used as a product on its own, instead is usually re-blended with a portion of Extra Virgin or Virgin grade olive oil. The commercial name given to this blend is simply Olive Oil (composed of refined olive oil and virgin olive oils) and often it is accompanied with varying descriptors such as “Mild-taste”, “Light-taste”, “Classic”, “Traditional” or similar.
You can read more about olive oil grading in the “Choosing Your Oil” section of this website.

Once the oil has been tested, it may be deemed ready for sale, meaning it may be bottled directly from a single tank, or blended with other tanks of olive oil in order to achieve a desired final flavour profile (much like a wine of multiple grape varieties).
Since oxygen is the enemy of the oil, the tank should either be full (meaning there is very little exposure to oxygen), or the tank should be flushed with nitrogen gas to expel the oxygen. This ensures that the oil can be stored for several months or even a year or more without any significant oxidation or degradation of the oil and its flavour. Generally, the oil is not bottled immediately, but is bottled when it is needed, because the conservation of oil during the year is better in the large tank than in the bottle. Therefore at the time of bottling (or filling of tins or drums), the oil is generally re-sampled and tested again by an internal or IOC-certified laboratory to ensure the oil has not oxidised or degraded and lost its grading. In some cases, producers choose to flush their bottles or tins with nitrogen as an added step to ensure the oil is protected from oxidation right up until when the consumer opens it for the first time.